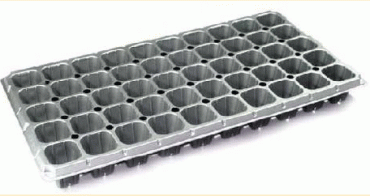 Cell Trays are a convenient way of raising and transporting large numbers of seedlings.

Cell Trays are a convenient way of raising and transporting large numbers of seedlings.

The trays are made of rigid plastic and are lightweight and stackable.

The outside dimensions of each tray is the same but the cell sizes contained within the trays varies depending on the growers preference.

Seedlings with a larger root mass or ones which will occupy a tray for a longer period of time will require a larger cell size.

Free flowing media such as coir, vermiculite or scoria is scooped onto the top of the trays and then levelled out. Seeds are planted into the top of each cell and then the tray is watered and put into the normal propagating system e.g Ebb and Flow tables or Overhead Sprinklers.

Once the seeds germinate and the seedling develops its first true leaves and a good root mass, the seedlings can be pulled out of the cell trays like a plug. The roots would have formed into a tight ball and this plug can then be placed directly into a hydroponic system (e.g NFT gully) or into a larger media filled grow pot or cocoslab.

Once all the seedlings have been removed from the cell tray, the tray is then hosed down and placed in a soak bath containing a liquid sanitiser (e.g Oxine). This sterilises the tray so it is ready for the next crop.

There are no reviews yet.

Be the first to review “Seedling/Cell Trays” Click here to cancel reply.